Camel Health – the life blood of a Kenyan Community 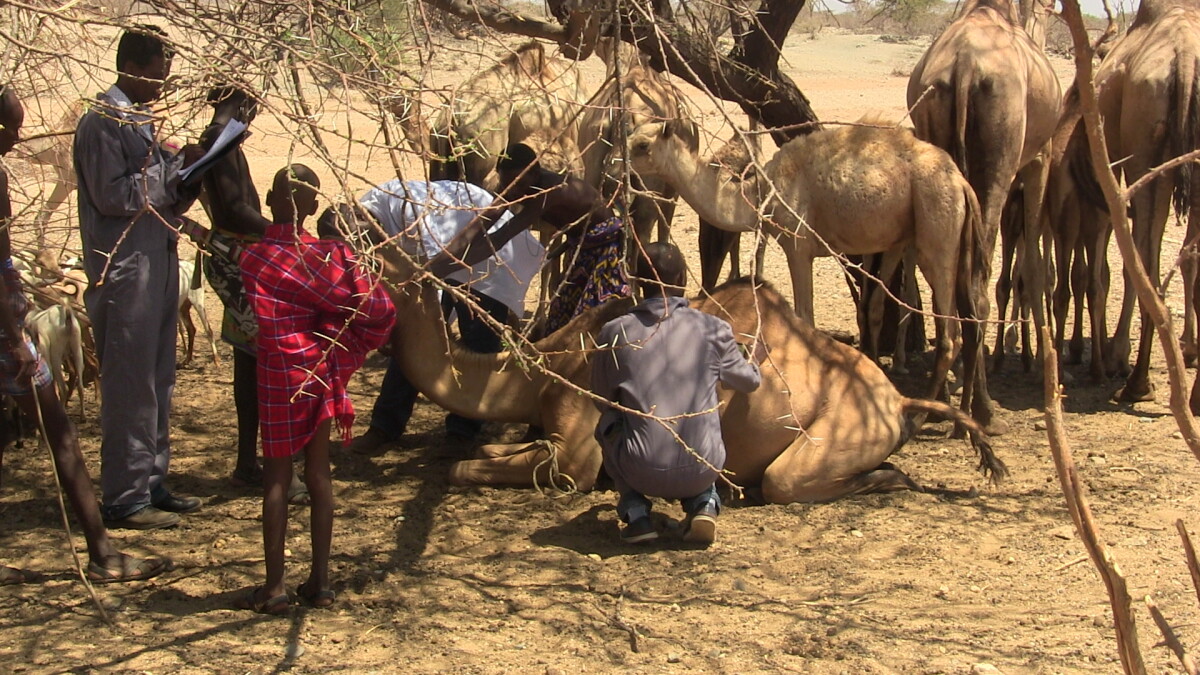 Camel Health – the life blood of a Kenyan Community

Importance of Camels in northern Kenya

Livestock can be the sole source of nutrition and livelihoods in largely nomadic and agro-pastoral communities; it contributes about 30-50% of the agricultural GDP in African countries. Africa has 80% of the estimated 28 million camels in the world and is home to more than 200 million small ruminants. One-humped camels are highly treasured commodities that determine one’s status among the nomadic pastoralist societies of northern Kenya. They are kept for milk (consumption and income), meat, hides, transport, and social capital. Camels are prized for their survival in harsh arid and semi-arid regions characterised by prolonged droughts caused by climate change. But camel productivity is constrained by diseases and pests. In northern Kenya, keds are common blood-feeding biting flies that infest camels, small ruminants such as goats and sheep, cattle, donkeys, and dogs. Some species of keds are host specific, for instance we observed that camel keds exclusively infest camels and not other co-herded livestock species. Similarly, dog-keds were only found on dogs, unlike the third species of keds that exhibited wide host-range as they were found on goats, sheep, cattle, donkeys, and dogs. In the process of feeding, many examples of blood-sucking biting insects are known to spread diseases from infected to uninfected animal hosts, for instance, mosquitoes can transmit Plasmodium parasites causing malaria in humans, sandflies transmit leishmaniasis, and this list is long. However, the potential role of livestock keds in disease transmission is poorly understood at present.

1) Profile the blood pathogens in camel as well as in keds collected from the camels, and

2) Determine the ability of camel keds to transmit pathogens.

Our findings show the following diseases to be more prevalent in camels: anaplasmosis and ehrlichiosis caused by bacteria, and trypanosomiasis caused by at least three species of trypanosome parasites. The Anaplasma and Ehrlichia species are intracellular pathogenic bacteria that infect red blood cells (RBCs) of vertebrate hosts leading to anaemia. In contrast, trypanosomes are extracellular (i.e. establish outside the blood cells) protozoan pathogens, but also contribute to anaemia as they destroy RBCs. This disease is often fatal if the animal is left untreated. Further, we show for the first time that camel keds are competent transmitters of anaplasmosis, but not of trypanosomes nor Ehrlichia.

By involving taxonomists at the Natural History Museum in London, and Zoology Department of the University of Cambridge , we unequivocally identified three different species of livestock keds in northern Kenya, namely: (i) camel-specific Hippobosca camelina, (ii) dog-specific Hippobosca longipennis, and (iii) Hippobosca variegata, which displayed broad host-range. These flies bite animals to obtain a bloodmeal and in the process could inadvertently spread and maintain transmission of diseases. We show that camel keds do carry up to four diseases caused by various trypanosome species, pathogenic bacteria - Ehrlichia, Anaplasma, and Theileria spp.. Detection of these pathogens in camel keds implies that during feeding, the flies ingest blood together with the haemopathogens in case the host is infected (Kidambasi et al., 2020). Recently, we detected zoonotic bacterial diseases such as Brucella spp., Clostridium perfringens, and Bartonella schoenbuchensis in dog-specific keds (Mutwiri et al., In preparation). Unravelling the interactions between different keds and their livestock hosts infected with multiple diseases will reveal the disease transmission dynamics of these insect vectors.

As part of my THRiVE postdoctoral fellowship, and in collaboration with the Biochemistry Department of the University of Cambridge and my THRiVE mentor Professor Mark Carrington, we have developed more sensitive nested PCR-high resolution melting analysis (HRMA) approach that combines four-gene markers for accurate detection of African trypanosomes in ked and camel blood samples (Kidambasi et al., In preparation). This PCR-HRM is superior to conventional PCR as it has advantages of being rapid, low-cost, allowing high-throughput pre-screening of select samples based on the reference control melt curves.

When keds bite camel hosts to acquire bloodmeal, they may also take up pathogens if the camel is infected. In fact, we detected identical blood-borne pathogens in camels and their keds, leading us to propose use of keds to indirectly detect pathogens circulating in livestock through a technique known as xenodiagnosis that involves disease surveillance in flies instead of its animal host. We recently published these findings in AAS Open Research journal (https://aasopenresearch.org/articles/2-164). Working on ked samples instead of camel blood provides a methodology that is easier, less invasive, painless (to camels as they are not bled for sample collection), and less risky to camel handlers. Collection of keds off camels is also faster and less costly as fewer field assistants are needed to do this work.

We showed for the first time the ability of ex-camel keds to transmit bacterial disease of camels, caused by “Candidatus Anaplasma camelii”, to test mice and rabbits (Bargul et al., In preparation). This emergent Anaplasma species, occuring in more than 90% of the sampled camels, is suspected to be zoonotic, suggesting possible transmission of this pathogen to humans via infrequent ked bites. However, our data shows that these keds cannot transmit African trypanosomes to laboratory animals, despite harbouring up to three species of trypanosomes they acquired from naturally infected camels (Bargul et al., In preparation).

Impact of the study findings

The detection of pathogens (such as trypanosomes, Anaplasma, Ehrlichia, and Bartonella spp.) in camels and their keds is of great public health and veterinary concern. The  information from my studies can:

In addition, research engagement with farmers led to improved understanding of disease transmission by insect vectors such as keds, ticks, and other biting flies, thus contributing to. disease control. 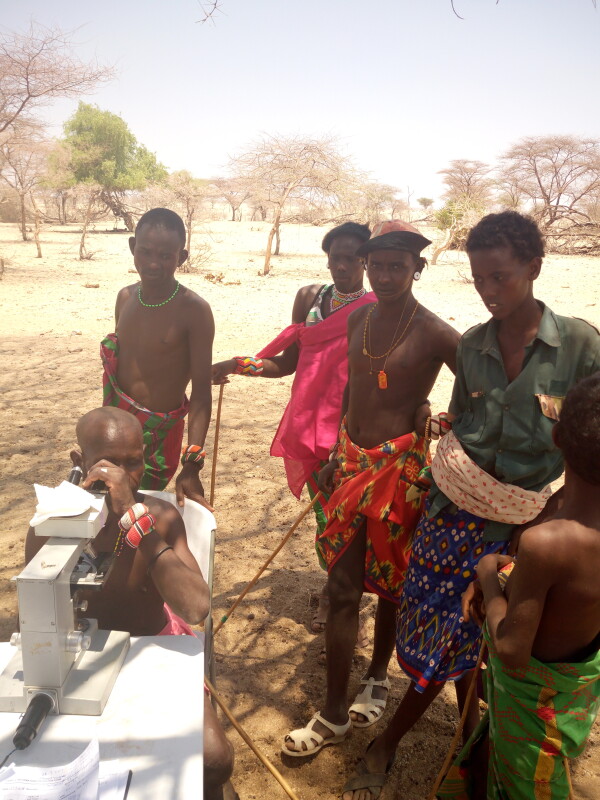 During our public engagement meetings with camel keepers in northern Kenya, we discuss the importance of education in creating sustainable development and improving quality of life. The illiteracy levels in this marginalized region are the highest in Kenya, with about 86% of the household heads lacking education and unable to read or write (Smart Survey Final Report, 2017).

Many children in this region do not get chance to go to schools mainly because of lack of understanding about education by their parents and guardians. Instead, they remain to assist their parents in livestock keeping. This scenario is exacerbated by insufficient schools in the region. Nomadic pastoralists will usually move into remote areas, away from schools, in search of pastures and water for their livestock. However, the school enrolment rates are now improving due to Kenya’s government initiative to offer incentives such as provision of free lunch to children attending Primary and Secondary schools. Our community and public engagement initiatives could contribute positively to school enrolments by enlightening the parents on matters relating to education. In addition, I have adopted Laisamis Secondary School for  a THRiVE linked mentorship programme and I visit the school at least two times in a year to interact with the students and discuss the role of science for development, choice of career paths based on the interest of individual students, how to achieve academic excellence and the journey towards future goals.