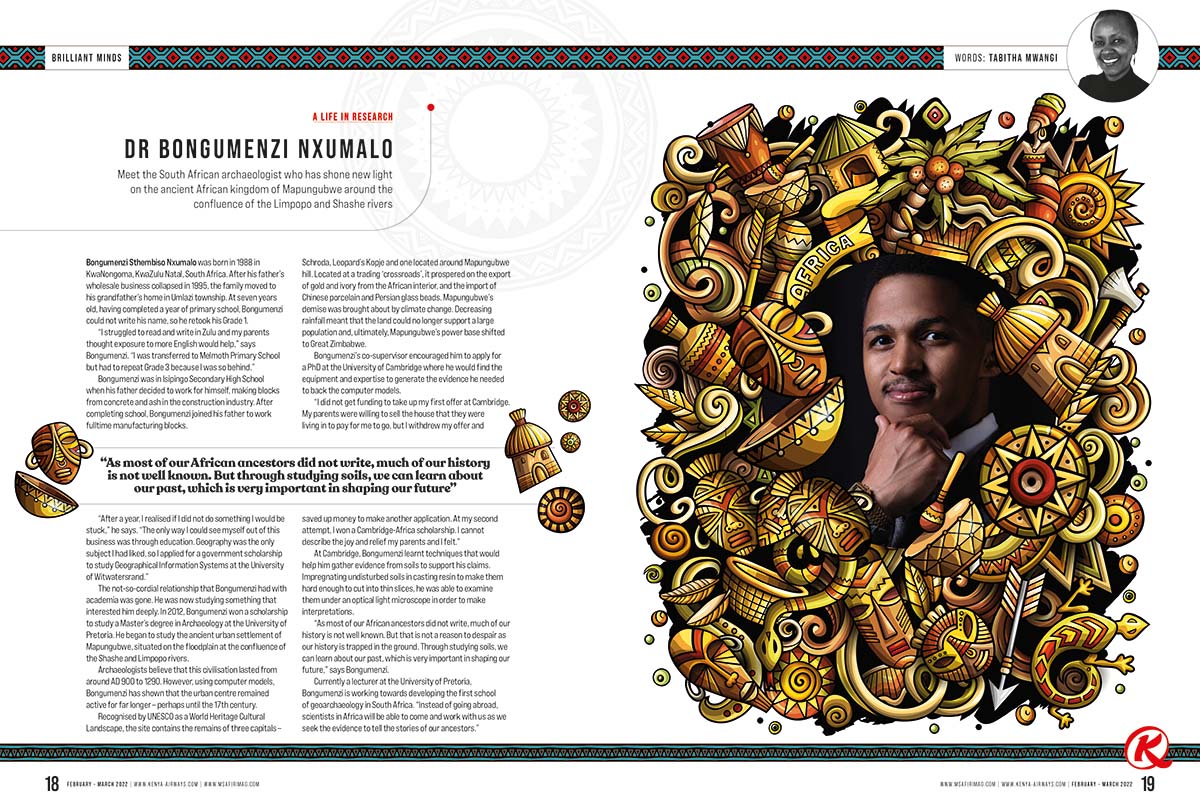 Meet the South African archaeologist who has shone new light on the ancient African kingdom of Mapungubwe around the confluence of the Limpopo and Shashe rivers.

Bongumenzi Sthembiso Nxumalo was born in 1988 in KwaNongoma, KwaZulu Natal, South Africa. After his father’s wholesale business collapsed in 1995, the family moved to his grandfather’s home in Umlazi township. At seven years old, having completed a year of primary school, Bongumenzi could not write his name, so he retook his Grade 1.

“I struggled to read and write in Zulu and my parents thought exposure to more English would help,” says Bongumenzi. “I was transferred to Melmoth Primary School but had to repeat Grade 3 because I was so behind.”

Bongumenzi was in Isipingo Secondary High School when his father decided to work for himself, making blocks from concrete and ash in the construction industry. After completing school, Bongumenzi joined his father to work fulltime manufacturing blocks.

“After a year, I realised if I did not do something I would be stuck,” he says. “The only way I could see myself out of this business was through education. Geography was the only subject I had liked, so I applied for a government scholarship to study Geographical Information Systems at the University of Witwatersrand.”

The not-so-cordial relationship that Bongumenzi had with academia was gone. He was now studying something that interested him deeply. In 2012, Bongumenzi won a scholarship to study a Master’s degree in Archaeology at the University of Pretoria. He began to study the ancient urban settlement of Mapungubwe, situated on the floodplain at the confluence of the Shashe and Limpopo rivers.

Archaeologists believe that this civilisation lasted from around AD 900 to 1290. However, using computer models, Bongumenzi has shown that the urban centre remained active for far longer – perhaps until the 17th century.

Recognised by UNESCO as a World Heritage Cultural Landscape, the site contains the remains of three capitals Schroda, Leopard’s Kopje and one located around Mapungubwe hill. Located at a trading ‘crossroads’, it prospered on the export of gold and ivory from the African interior, and the import of Chinese porcelain and Persian glass beads. Mapungubwe’s demise was brought about by climate change. Decreasing rainfall meant that the land could no longer support a large population and, ultimately, Mapungubwe’s power base shifted to Great Zimbabwe.

Bongumenzi’s co-supervisor encouraged him to apply for a PhD at the University of Cambridge where he would find the equipment and expertise to generate the evidence he needed to back the computer models.

“I did not get funding to take up my first offer at Cambridge. My parents were willing to sell the house that they were living in to pay for me to go, but I withdrew my offer and saved up money to make another application. At my second attempt, I won a Cambridge-Africa scholarship. I cannot describe the joy and relief my parents and I felt.”

At Cambridge, Bongumenzi learnt techniques that would help him gather evidence from soils to support his claims. Impregnating undisturbed soils in casting resin to make them hard enough to cut into thin slices, he was able to examine them under an optical light microscope in order to make interpretations.

“As most of our African ancestors did not write, much of our history is not well known. But that is not a reason to despair as our history is trapped in the ground. Through studying soils, we can learn about our past, which is very important in shaping our future,” says Bongumenzi.

Currently a lecturer at the University of Pretoria, Bongumenzi is working towards developing the first school of geoarchaeology in South Africa. “Instead of going abroad, scientists in Africa will be able to come and work with us as we seek the evidence to tell the stories of our ancestors.”