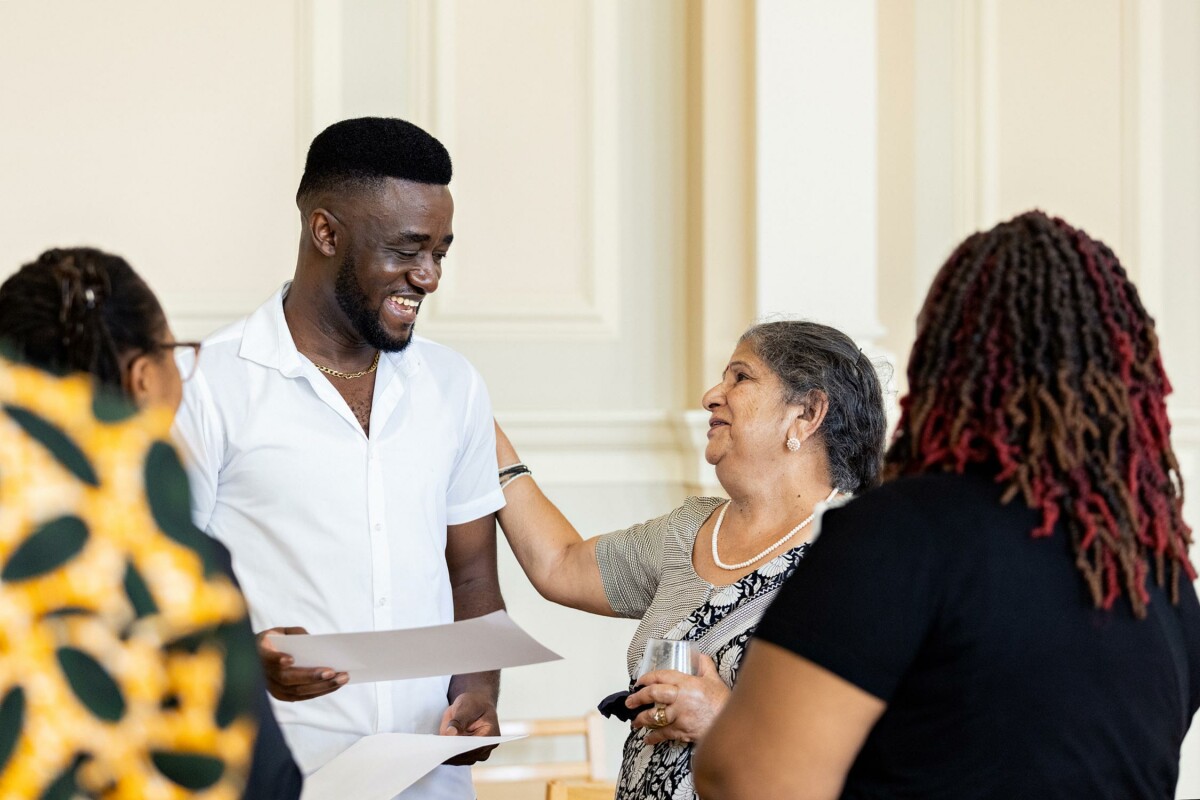 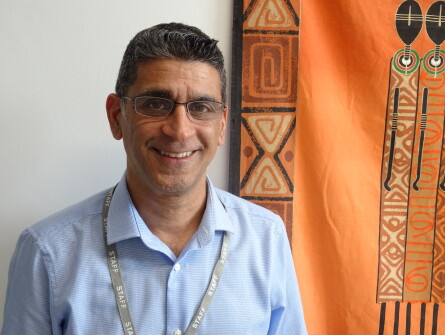 Dr Amit Bhasin was the programme manager for Cambridge-Africa from 2019 to 2020. He had previously worked in research capacity development at the London School of Hygiene and Tropical Medicine for 17 years, managing consortia with multiple partners in Africa and Asia.

All who knew Amit attest to the joyful enthusiasm he brought to work. He was a great administrator who knew how to bring people together, making everyone feel valued. He had not been unwell so his sudden passing away was a jolt. Amit’s friends and colleagues raised Funds to create a prize to be awarded to an outstanding African research student at the University of Cambridge to remember him and celebrate his dedication to supporting African researchers throughout his career. 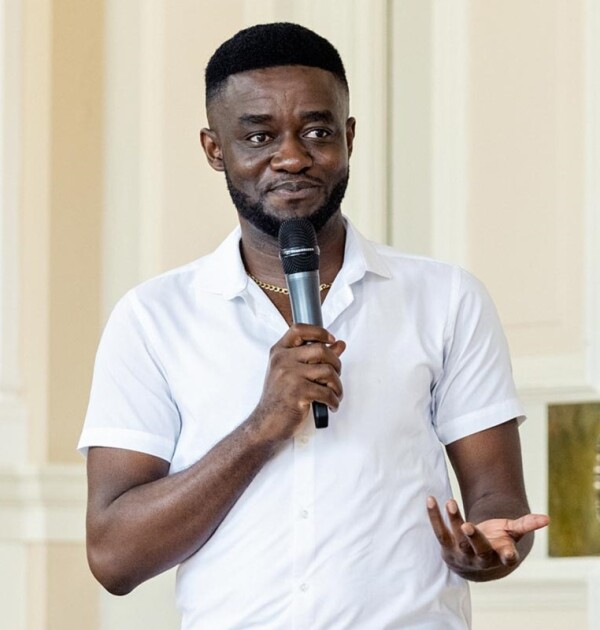 So who is this David and what impact did Amit have on his life?

Right upto his second year in secondary school, David lived a sheltered life and was attending St John’s College, Alihagu, a private boarding school in Agbor, Delta State, Nigeria. Then, his father encountered financial problems. David had to drop out of the expensive school and join a rural secondary school. Things were so bad that his parents were struggling to put 3 meals on the table a day. Although David understood that this meant they would not be able to afford university education, he still worked hard and did very well in his secondary school exams.

‘At that point I felt those high grades were a complete waste. I was sure that all I could do was be a trade apprentice to a successful business person in my community, a practise known as ‘Igba Boi’. This did not require good exam results,’ said David.

‘Igba Boi’ is an Ibo traditional mentorship scheme were a wealthy man selects young men in the village who, in exchange for food and accommodation, work for him for free and learn his trade. After about 6 – 8 years, the ‘master’ gifts his mentee a large sum of money to enable them to run a similar business.

However, a different opportunity presented itself. David’s aunt was running a failing restaurant business. She asked David to help with the promise that she would pay for his university education if he revived her business. David seized the opportunity. He travelled to nearby cities to learn how similar businesses were ran. He spruced up the restaurant and interacted with customers to find out what they wanted. Within two years, the restaurant was thriving and making good profits. David’s aunt was so pleased that she paid for his university entrance exams. David joined the University of Nigeria, Nsukka, to study Pure and industrial chemistry.

However, David was now 5 hours away from the restaurant and could not manage the business. It begun to fall apart. By the time he was in his second year, his aunt could no longer pay his college fees. He had two options: drop out of university or find a way to make money.

David had started ‘Chucks Academy’ offering coaching for a first year Chemistry unit that had a failure rate of 40%. David had worked hard on the subject, staying up late to put in hours of revision and had scored an ‘A’ which was a rare accomplishment. His coaching exposed an opportunity. David wrote a book in which he demonstrated how to tackle exam questions step by step. Using a loan from a sympathetic lecturer, he published the book. He sold over 2,000 copies in two weeks. This enabled him to pay his debt, clear his second year fees and have enough for his upkeep. But that did not stop his money worry.

Fortunately, Hokkaido University, Japan, was offering scholarship to the top 2 students at the University of Nigeria, Nsukka. Through this JASSO scholarship scheme, David completed his degree in Japan. He returned to Nigeria to complete his youth service before returning to Japan to take on his MEXT scholarship to pursue a Masters and PhD in Nanoscience of Advance metal complexes at Tohoku University.

‘I was very grateful for what I had in Japan but I was rather lonely. Although I could speak the language, I was not fluent enough to make use of the opportunities available and I also did not have the finances other students had to participate in extracurricular activities. I decided that I wanted to pursue my PhD in an English-speaking country. But I also wanted to pay back for my good fortune. I could not repay Japan or my aunt, who died in 2015. But I was able to initiate an exchange program for 2 students to come from Nsukka to Tohoku every year,’ said David.

David chose to study at the University of Cambridge. On arrival, the 2018 student union elections were underway and David nominated himself for the post of International Officer of the graduate union, which he won. He was keen to fulfill one of his campaign promises to see an increase in admissions to the University of Cambridge of more diverse group of students, especially from Africa.

‘I found out that there were many people from Africa that were offered admissions they did not take up due to lack of funding. When I talked to funding bodies, like Gates and Cambridge Trust, I realized that we needed to make it possible for students from Africa to make competitive applications that could win scholarships,’ said David.

When his term as international officer came to an end, he felt the work was not done and he launched ‘African of Our Dream Initiative’ in 2018. He was voted Wolfson college President and initiated the Wolfson Entrepreneur Society and became the first president.

David has also initiated the Partner-Africa project within the ‘African of Our Dream Initiative’. The aim was to create interactions between Nigerian students at Oxford and Cambridge with staff and students at the Covenant University, a private university in Nigeria. Students from the UK travel to Nigeria, present seminars and actively participate in knowledge exchange. This scheme is fully funded by the owner of Covenant University, which ensures its sustainability.

David belongs to almost 15 committees which he is fully engaged with. However, that has not affected his work and he submitted his thesis on time. His research investigates the use of computational techniques to explore how scientists can design molecules that will lead to having high performance single molecule magnets that can be used in information storage and quantum computing.

When Dr Amit Bhasin joined Cambridge-Africa, David was in his second year. Amit initiated interactions with Cambridge-Africa sponsored PhD students. David, who was appointed student representative at the Cambridge-Africa Strategic Advisory Group, spend time with Amit discussing ideas. Amit had barely completed 6 months in his position when Covid-19 broke out and students were forced to spend a lot of time on their own.

‘He found a way to bring us together and showed us fatherly love at a time when this was much needed. At some point, he was no longer playing the role of manager, he was playing the role of family supporter. He was like a father trying to take care of his kids. He was very funny and created this relaxed atmosphere that made people feel they could say anything. Although Amit had a lot of experience working in Africa, he was always ready to listen to people and understand the challenges people were facing,’ said David.

The PhD scholars felt connected to Amit and had been wondering about his silence for 2 days when they received an email from Dr Caroline Trotter informing them of his passing.

‘My first thoughts were ‘I need to wake up from this nightmare? How can this be possible?’ But it made me realize just how short time can be. You have to do everything you think you can do because you don’t know what tomorrow holds or what it is going to bring,’ said David.

Receiving the inaugural Dr Amit Bhasin prize therefore means a lot to David, ‘I feel honored to receive this award, Amit’s memory will always live with me and I will continue to support the African community in Cambridge and beyond’.