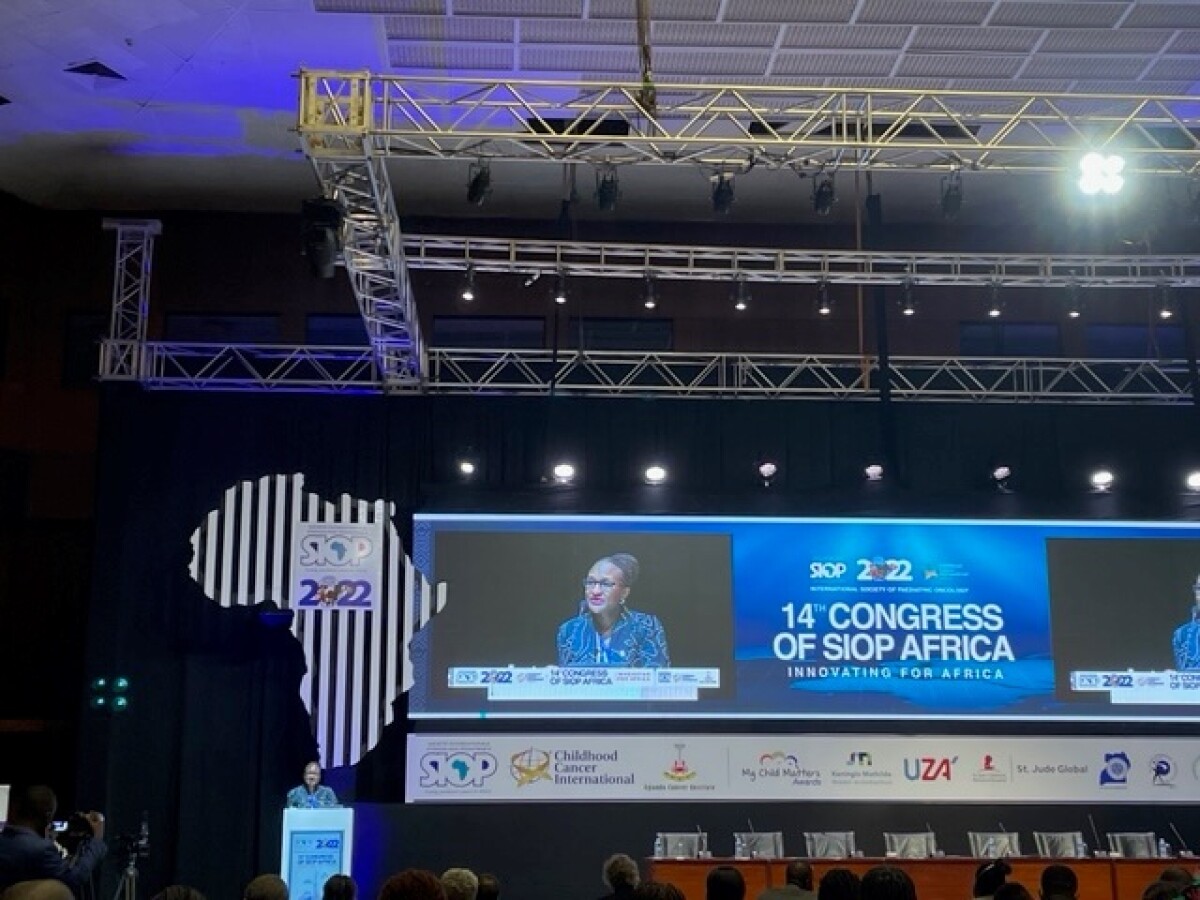 At last, an in-person meeting, a break from Zoom and a thoroughly enjoyable meeting of the African branch of the international society for paediatric oncology in Uganda!

I was very fortunate to be invited to speak about our work with the Uganda Cancer Institute (UCI) in Kampala at the International Society for Paediatric Oncology (SIOP) Africa branch meeting in March. Coincidently, the meeting was also held in Kampala which meant that I could catch up with friends and colleagues at the UCI as well as attending the meeting. After 2 long years of COVID-induced Zoom meetings, it was an absolute pleasure to meet in person and discuss the progress of the past 2 years. 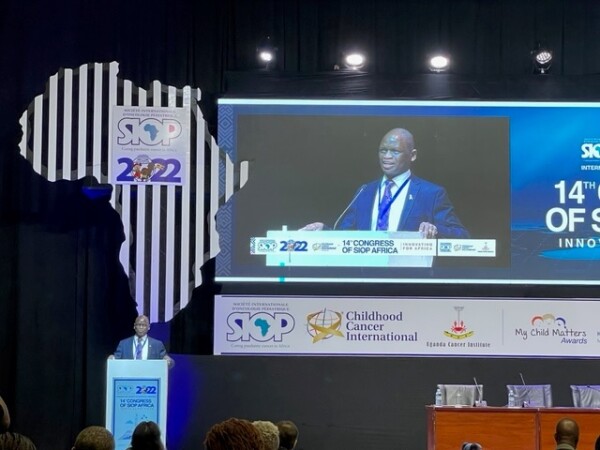 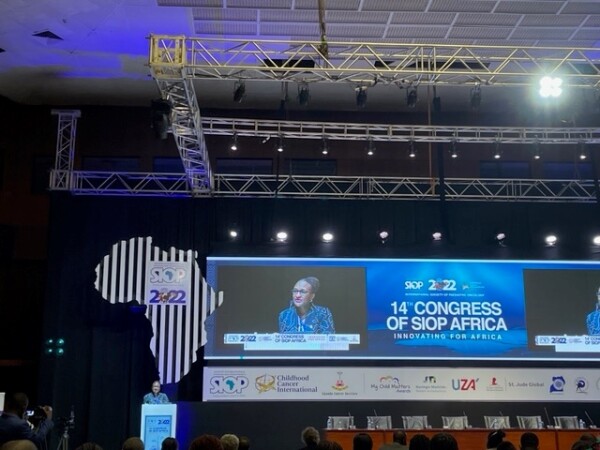 Top Dr Jackson Orem, executive director of the Uganda Cancer Institute addressing the delegates of the meeting, Dr Joyce Balagadde-Kambugu opening the meeting as chair of SIOP-Africa and chair of the local organising committee 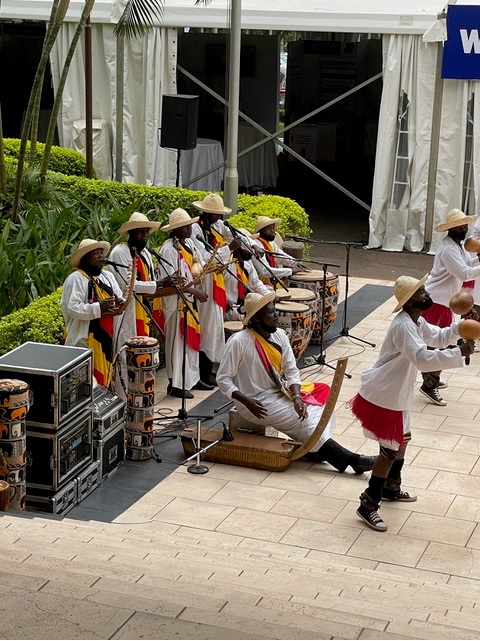 The 14th SIOP-Africa meeting saw people from around the World attend with over 350 delegates from at least 33 countries. The theme of the meeting was ‘innovate for Africa’ and it was clear by the end of the meeting that this is truly the case; much work is being done to lay the groundwork for promising research to improve the lives of children with cancer in Africa.

The conference was organised by the Uganda Cancer Institute (UCI), supported by the Ugandan Cancer Society, the Palliative Care Association of Uganda, the Uganda Child Cancer Foundation and the Uganda Paediatric Association. During the meeting 10 workshops were held by multidisciplinary teams including paediatric oncology, surgery, radiation oncology, nursing, pharmacy, palliative care and others.

I was fortunate enough to attend patient outreach/advocacy sessions as well as the scientific ones. Contributions from patient groups are very important in making sure that research addresses the problems they experience. There was also some time for networking and fun with much eating, drinking, dancing and general enjoyment – so important in these times!

It was also a great opportunity to see recent progress at the UCI. We have continued to build our bioresource of childhood cancer despite stretched healthcare services due to the pandemic. It was also pleasing to see the considerable progress in building a new research institute at the UCI. This building will house research labs, facilities for an extended bioresource, rooms for transplants, wards for treatment of cancer patients and clinical trials amongst many other facilities. This building promises to hold the leading cancer research institute in East Africa, if not Africa. Exciting times are ahead! Indeed, we have recently been successful in securing research funding from both Great Ormond Street Hospital charity and the Little Princess Trust in collaboration with the Children’s cancer and leukaemia group. This will allow us to continue our work in Uganda to understand how Burkitt lymphoma develops and in doing so, to determine the best way to treat it. Burkitt lymphoma was first described by Denis Burkitt at the UCI in Uganda leading to seminal discoveries first detailing the discovery of viruses as causative of cancer. It was also the place where children with Burkitt lymphoma were first treated with chemotherapy showing that it could cure at least some children. These days, survival with chemotherapy for children at the UCI is over 70% but there remains much work to be done so that 100% of children survive experiencing  the least side-effects of treatment. Our research hopes to achieve this by developing tests that detect the cancer earlier so that it can be treated sooner with kinder therapies and better outcomes. 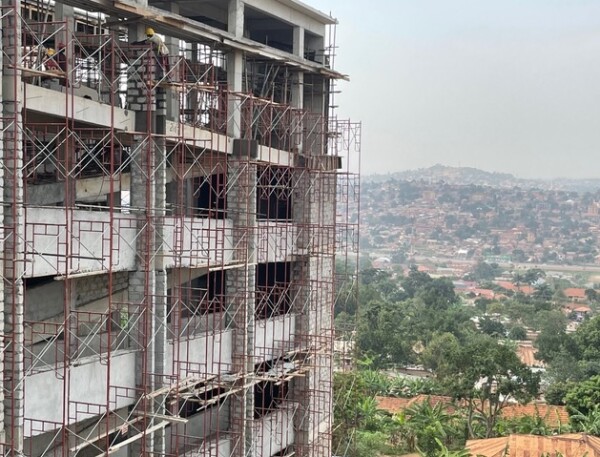 The new research institute under construction at the UCI in Kampala. In the photo on the left, Kampala can be seen spread out in front of the building which is sited on a hill.