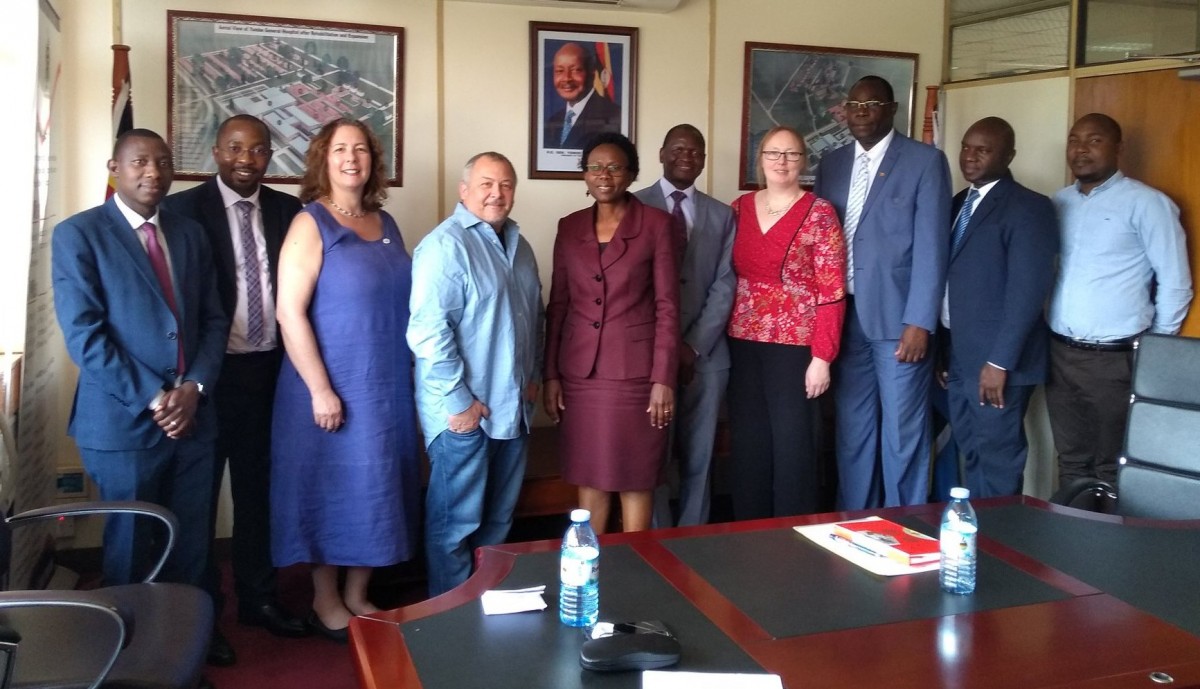 The new decade started well for the exciting developing collaboration between the Uganda Cancer Institute, CRUK Cambridge Institute, CRUK Cancer Centre and Cambridge-Africa. Professor Greg Hannon, Director of the CRUK Cambridge Institute (CRUK CI), joined Corinna Alberg from Cambridge-Africa and Dr Suzanne Turner from the CRUK Cambridge Centre and Department of Pathology on a visit to officially launch the new CRUK CI Summer Research Programme that will start in June 2020. This initiative will respond well to the priorities for the Uganda - Cambridge collaboration identified by the Director of the Uganda Cancer Institute (UCI) when he visited Cambridge in May 2019.   On that visit, Dr Jackson Orem emphasised the urgent need to excite young Ugandan researchers into pursuing a career in cancer research.

The Summer Research Programme will enable the 12 successful candidates to be embedded within research groups for a 10 week period at the CRUK CI. This will allow the young researchers to appreciate the excitement of the developments in oncology research as well as develop their research skills and make the connections that will help them to apply for funding to pursue PhDs and so make the step into oncology research. The Summer School has attracted a huge number of applicants with over 1,300 young would-be researchers applying for the 12 places and this is in its launch year. Two of the twelve  places have been set aside for Ugandan applicants following on from the successful pilot in 2019 when two Ugandans, Paul Katangole and Henry Wannume, spent the summer working with research teams at CRUK CI with their visit funded by Cambridge-Africa and supported by CRUK CI. Paul worked with Dr Nitzen Rosenfeld’s team on circulating tumour DNA and Henry with Professor Carlos Caldas’ research group on breast cancer. This experience was very positive both for the Cambridge teams and the Ugandan participants. It led to the successful application for a Cambridge-Africa ALBORADA Research Fund award for a collaborative research project on identifying cell-free DNA methylation markers for prostate cancer at the UCI.

The visit to Uganda this January marked the official launch of the Summer Research programme and included meetings between the UCI, the Cambridge delegation and the Ugandan Prime Minister, Dr Ruhakana Rugunda. Dr Rugunda showed great interest in the collaboration, and his medical background as well as his interest in cancer research and care, made this meeting a highlight of the visit. The Cambridge team also met with the Minister for Health, Dr Jane Ruth Aceng, who also warmly welcomed the collaboration. These meetings were followed by the official launch of the Summer Research programme which was widely covered by the Ugandan media. As part of this, the recently signed Memorandum of Understanding between the University of Cambridge and the Uganda Cancer Institute was featured.

Day two focused on seeing the exciting developments taking place at the Uganda Cancer Institute. A five-storey research block is under construction - a year ago the ground had not yet been broken. It was an impressive example of how quickly such a facility can be built, and in this, Uganda leads the way. We poured over the plans of how this research space will be used. While the construction proceeds, in another part of the UCI we could smell the fresh paint of the newly completed research laboratory where research activities between Sylivestor Kadhumbula of the UCI and Dr Suzanne Turner will take place. This laboratory will be used to investigate Burkitts lymphoma, a common paediatric cancer in Uganda which is very rare in the UK. The laboratory will allow tissue to be stored and studied to investigate biomarkers and immune response to the tumour as well as identifying therapies for relapse and refractory disease.  The aim of this research is to improve Ugandan children’s survival rates to match the survival of children in the UK. We look forward to many more joint initiatives as this collaboration goes from strength to strength.